Double Recognition for GSR at the Ghana Mining Awards

At the Ghana Mining Industry Awards gala on November 25, 2016, Golden Star (Bogoso/Prestea) Limited was recognized as first runner up for Corporate Social Investment Project of the Year for the company’s Prestea South Mbease Nsuta Community Benefit and Value Retention Initiative. 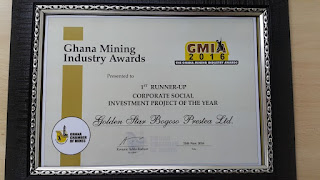 So what makes this project worthy of a national award?  Read on to find out...

What Does the Project Aim To Do?

The project has the objectives to:

• Retain and enhance social, economic and environmental improvement benefits associated with Golden Star’s operations
• Promote interest in and enhance opportunities for local residents to benefit from mine operations through the formation of new or expanded local businesses
• Acquire a greater proportion of mining services supply locally through small business incubation and advisory support
• Strengthen the capacity of local businesses to support a wider array of services associated with mining, and be positioned to bid for contracts elsewhere in the industry

The project initially involved programs to enhance the development of local suppliers and convert an unauthorized refuse disposal site into a community recreational park.  However it captured the community’s imagination and a number of daughter projects have evolved for even greater community benefit.


What Benefits Does the Project Bring?

The project has generated local employment opportunities and business incubation for citizens of the mining project host communities that previously would have been filled by services providers from outside of the region.  These include:
• Approximately 250 long-term unemployed youth of the locality have received employment, on-the-job training, and productive work experience through this initiative since July 2015
• 18 local companies are involved in the initiative, with full control of employment vested in the local companies to enable positive employment opportunity for qualified local citizens.
• Golden Star supported the formation, registration and licensing with the Minerals Commission of the ‘umbrella’ company, Local Companies in Mining Services (LOCOMS), providing haulage or equipment hiring contract services
• Over US$8 million has been paid to local companies since the project inception, reinvigorating the depressed local economies of Prestea and Bondaye
• Local companies have gained enhanced technology and managerial knowledge, access to industry peers and competitors, knowledge on maximizing value retention, and positioning for growth and expansion outside of the locality
• Flow-on benefits include work for auto-mechanics, boilermakers, food vendors, waste management contractors, banking establishments and more. In the region, flow-on has been conservatively estimated as 4 to 1, i.e. every one mining job brings 4 other jobs to the community. With the direct employment of 250 citizens, it is conceivable that 1,000 people are benefiting from this initiative

Enhanced Use of Land

The recreational park plan agreed with traditional and elected leaders will incorporate parkland, outdoor eating areas, kiosks, toilet facilities and other infrastructure to enable use of the venue by community for a wide variety of social and cultural programs.

In synergy with the company mining operations, Golden Star has completed the site rehabilitation, and the almost 5,000 residents living in direct proximity of the refuse site have benefited from a significant improvement in hygiene and sanitation.

Not only was the site a sanitation risk, with sewage and bacteria overflowing to the Nsuo Kofi stream that runs through Prestea town and discharges to the Ankobra River, but it was also a breeding ground for disease vectors.

The conversion of the site to a community park will benefit the whole community. At present, there is not a single site available for public community recreation in the entire jurisdiction of the Prestea community, which includes some 30,000 people.

Nearby local businesses have benefited from from the rehabilitation program:

• The owner of a hotel that views the site had halted hotel expansion and decided to sell the expansion structure, as patronage had declined with the growth of the refuse site. With the site rehabilitation, and planned park, patronage has increased and the hotel expansion has resumed.
• The Ave Marie Restaurant, overlooking the refuse site, has also experienced increased patronage. The owner has expanded the restaurant boundary and established an external eating area and garden.

“When the Prestea South project commenced in July 2015, I secured a contract with another third party contractor as a food service provider. I currently serve an average of 30 staff per day. My restaurant used to be located close to a community refuse dump, which was poorly managed, but Golden Star is rehabilitating the land to convert it into public space. This has significantly changed the environment that I operate in and it is already having a positive impact on my business.”

Golden Star, traditional and elected leaders, opinion leaders and youth in Prestea came together to agree the plans for improvements in community waste management, as well as future site development.

• The recreational parkland plan has received wide support and endorsement from the community
• The engagements have resulted in the Community Mine Consultative Committee electing to fund, through the Golden Star (Bogoso/Prestea) Development Fund, the purchase of community waste management equipment.
• A new, larger, more sustainable waste disposal location has been identified by the Prestea Huni-Valley District Assembly and community
• Upgraded urban waste transfer stations have been established by the Prestea Urban Council
• The general consensus is to embed the enhanced waste management services through a social enterprise-oriented, community business. Operated on a ‘pay as you throw’ or pre-paid household levy basis, it will provide a modest revenue to cover operation and maintenance.

Economic savings are expected to be realized by the Prestea Urban Council and Prestea Huni-Valley District Assembly through reduction in recurrent expenditure in managing the former refuse site.

As part of the value retention initiatives, a locally-owned waste management business, Passionate Community Services (PaCS), was contracted to provide door-to-door waste collection and disposal for the mining operations.

As part of this contract, PaCS also provides community sensitization on effective and approved waste disposal practices. Education provided by the PaCS team on the use of transfer stations is gaining attention and promoting more sustainable practices.

“With the inception of the Prestea South Nsuta Project, I have been able to secure waste collection and disposal as well as cleaning service contracts at Golden Star. I now employ a workforce of seven for both Golden Star and the community. In addition, a total of 250 households are currently registered with my company for waste collection and disposal.”

With the completion of the rehabilitation of the former refuse site, the Prestea Government Hospital management approached Golden Star to explore opportunities to reclaim a valley stopping the expansion of the hospital, and upgrade of access-ways to the hospital.

Golden Star, with the support of traditional leaders, was able to design an engineered backfill, which transformed the valley into usable land.  This will allow the hospital to expand and cater for the growing population.

Community Support for the Initiatives

A new NGO, Maintenance and Sustainability Africa (MSA), has been established by local youth in support of the refuse site clean-up and conversion to a community recreational parkland.

Members of MSA have provided free labour (voluntary services) in support of revegetation activities at the former refuse site, grassing the 1.2 hectare area. The formation of the group and their contribution is significant: for the first time in the area, local young people have volunteered their services for the betterment of the community.

Inspired by GSBPL’s decision to transform the refuse site into a community recreational park, the young people decided to make their own statement of support for the initiative.

“Maintenance and Sustainability Africa (MSA) is a youth led organization with a goal of offering sustainable solutions to the continent's development challenges. Our vision is to see an Africa where both infrastructure development and the environment are conserved. As an NGO that is focused on sustainability, we felt overwhelmed by the announcement that GSBPL is converting an illegal garbage collection site into a recreational facility for the benefit of Prestea Community. There could not be a more profound definition of sustainable development than this 360 degree turn around project, which transforms a 1.2 hectare, poorly managed, waste dumping site (a major source of pollution and diseases) into a facility that will provide refreshment and wellness to the catchment community. Therefore MSA decided to partner GSBPL to offer our quota of contribution to the project as well as to depict the great degree of improvement in the relationship between GSBPL and its catchment communities.  We say Kudos to GSBPL, as we look forward to a very successful project and to more enhanced partnerships to ensure a total development of our catchment communities and beyond.”