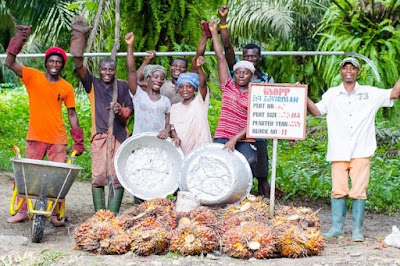 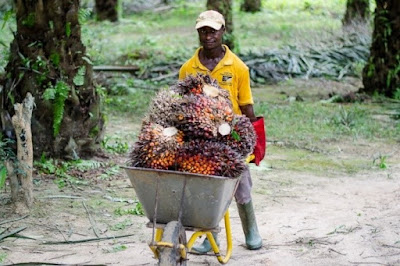 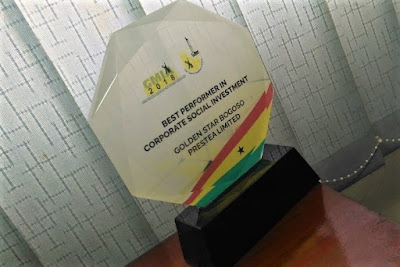 Congratulations to the Golden Star Oil Palm Plantation (GSOPP) for winning two major awards in 2018. GSOPP won the District Best Farm Based Organization Award at the National Farmer’s Day celebrations in Ghana for the third time and Best Performer in Corporate Social Investment at the Ghana Mining Awards for 2018.

Golden Star directs $1 per ounce of gold produced to GSOPP with the objective to reduce poverty through employment generation and promote wealth creation through sustainable agri-business. GSOPP is a multi-award winning social enterprise project, established in April 2006 as a non-profit subsidiary of Golden Star.

The Golden Star Oil Palm Plantation is one of Golden Star’s most well-known community development initiatives, with an employee base of more than 767 people, comprising of both farmers and workers. A socioeconomic impact assessment conducted in 2017 demonstrated that 2,089 dependents benefited directly from GSOPP.

With a significant number of people in our host communities benefitting from GSOPP, it is our commitment to continue expanding this landmark initiative every year. For more information on GSOPP visit; http://goldenstarinthecommunity.blogspot.com/2016/10/happy-birthday-gsopp.html

Congratulations to the Golden Star Oil Palm Plantation team for their marvelous performance.


So what did the GSR, GSOPP staff and farmers of GSOPP have to say?

Peter Addai (Operations Superintendent, GSOPP)
“These awards are testaments of the wonderful work that Golden Star is doing to improve the livelihood of its communities.
GSOPP remains a significant flagship livelihood program for Golden Star and is indeed making a difference to people’s quality of life. GSOPP demonstrates that Golden Star is contributing to broader economic development in the area that will be sustainable beyond the life of the mine.
We aim to secure a processing plant to process all of our fresh fruit bunches to ensure GSOPP achieve its full potential to support economic growth in and around the Golden Star catchment area”.

Daniel Wiredu, GSOPP Bogoso Farmers Association Chairman
“The palm plantation has really been of help to me. I was a palm plantation farmer but my plants weren’t yielding fruit like they should. When GSOPP got involved, our farming produce started booming.  GSOPP handed over the business to us and the money that we are now getting is huge compared to our formal farming practices. I used to plant 10 archers of land but the fruit it used to bare was quite little. I wasn’t able to take care of my family as a result and I couldn’t enroll my kids in school. I've seen a great deal of hardship in my life but now the story is different as I am able to help my family. Now I feel proud as a father. My kids are enrolled in school all thanks to GSOPP. Ayekoo GSOPP on your award!”

Mr. Tuffour Quaicoe, award-winning smallholder farmer
"I am a beneficiary of a four hectare palm plantation under the GSOPP project. I have received a monthly income and that is what I depend on to support my family. All my children are in school and I have also been able to empower my wife in small-scale trading. In 2014, I was named the Districts’ Best Oil Palm Farmer during the National Farmer's Day celebration. Today, I am happy that GSOPP has been awarded for the third time the District Best Farm Based Organization Award at the National Farmer’s Day celebrations in Ghana and Best Performer in Corporate Social Investment at the Ghana Mining Awards for 2018”.

Mr. Joseph Amoako Yorke, HR Officer GSBPL
“To say I am overwhelmed about this achievement is an understatement. The work being done by GSOPP in helping a large number of people in our catchment communities earn a living which is remarkable and I am excited to be a member of the GSR team. Kudos GSOPP”.

Samuel Kow Wilson, GSBPL Community Development Officer
“For GSOPP to be honoured as the best social investment initiative does not come as a surprise at all. Its benefits are direct and of great benefit to the selected farmers, landowners and the community. There cannot be a more sustainable way of supporting our communities than having a sustaining plantation that provides a source of income to them. I am honoured and proud to be part of this story which elevates the GSOPP model.
I am confident that GSOPP will remain true to its original goal of serving as an alternative source of livelihood for Golden Star Resources’ host communities.”

If you'd like to find out more about Golden Star and its approach to CSR, please visit www.gsr.com/responsibility.
Posted by Team GSR at 11:38 No comments: